I started visiting Guruji in Gurgaon on Sundays and holidays. I saw many people approach Him with their problems which were mostly diseases, ailments and sometimes even the kinds where all medicines had failed or had no possible cure. I could see people coming to Him, touching His feet and praying for their problems, diseases and I would sit patiently and watch as he would touch them at the point of pain and there remained no pain. This was an extraordinary experience of my life.

I continued visiting Gurgaon and used to sit at the ‘Sthan’ on the floor, for hours and hours. I saw Guruji attending to each one, rich or poor, young or old. Not a Person, he or she complained of not getting relief from their problems. 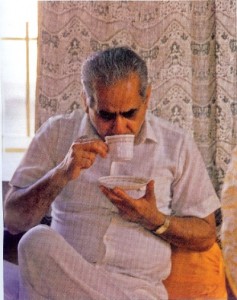 A lady came and said , “Guruji my right hand can’t open, my fingers are tied to my palm.” Guruji said, “A few days back, you went for gardening in the noon time and worked with this hand, there was a spirit enjoying there and it got disturbed, rather was annoyed and it made your hand tight gripped, I will open it beta.” Guruji then stroked her finger joints a few times and she opened her hand, fingers straightened. I could not understand how this could happen. I had been an aspirant for many years and had visited many saints and sages in north and south India, but never witnessed such a thing before.

However, the lady was cured and went away, smiling.

The unprecedented healing, from one to all without any medicine with a mere touch of his hand and along with Jal, Laungs & Elaichis was what I saw every time and this gave me a feeling of being in a different world and as if Guruji were GOD acting in human form.

I never saw Guruji tired or in fatigue, right from morning till night. As far as His food was concerned, all He took was a few cups of tea.

If some one offered sweets or fruits, He distributed them among the public but never ate himself. I feel incompetent to describe His attitude, his interaction with the people and His moods. It appeared that He was more happy to serve than be served. People felt totally secure after they bowed down to touch His holy feet. Their faces bearing an expression of ultimate satisfaction of having reached their destination.