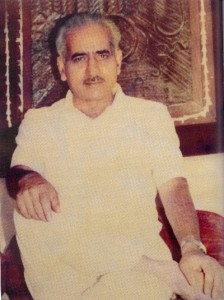 Guruji was sitting with Mataji in his room, when a man came and prayed for His blessings, said, “Guruji, kindly save my brother, he is suffering with an acute pain in his stomach.”

Guruji was in a different mood then, He said, “See the time in your watch and place you hand on your stomach.” He did as asked. Then Guruji said, “Now go home and enquire, your brother is all right.”

The man went home and found his brother perfectly alright. His family later told him that the boy was relieved of the pain the moment he had enquired about his condition, over the phone.

How could this happen?

Who could our Guruji be?

He did such an unimaginable task that I have no explanation or logic, though I was very much present on the scene.