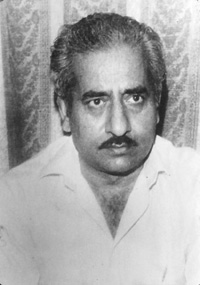 Right since childhood, Gurudev was in search of “something” in life but did not know what. After doing His metriculation, His parents married him. From the first day after His marriage, He left the house in search of the “thing” that He Himself did’nt know. For about 4-5 years He went around at all the religious places. He went to churches, gurudwaras and mandirs but He did’nt get what He intended to get. He even went to the himalayas. He spent His time with all sadhus but again He didn’t get what He wanted. After 4-5 years, He started meditation at a place called Santokhsar near Amritsar. He used to sit there at 1:30 in the night. Once when He was going to sit over there (On the 40th day of His meditation), a white snake, the size of a king cobra stood in His path and didn’t allow Him to go to that place. Then gurudev closed His eyes and told the snake that “whether you bite me or do anything, I must go there to meditate” and He stepped forward towards the place of His meditation. The snake allowed Him to pass and then, He heard a divine voice — “That whatsoever You want to get, You will get only in Your ‘GrihasthAshram’ (family life).”

Then He returned to His home. He started living His family life and brought back Mataji with full respect and honour. He then came to Gurgaon. He started His livelihood with any work that came His way and also started studying further. After completing His studies He got a job as an officer in the Ministry of Agriculture (soil survey department), Government of India. All this while, His chanting of various mantras continued. In the meantime OM appeared on His hand. 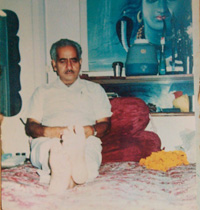 HOW HE GOT THE NAME GURUJI : He used to go to different places with His team for the survey of soil. Once He was passing a village near Ratlam (M.P.) in His jeep. Some villagers stopped His jeep and requested Him to carry a person to the city who was crying with pain in his stomach. (they requested that the person’s life will be saved if he is taken to a hospital in the city, otherwise he will surely die). When Gurudev saw the person who was crying in pain, a voice came from inside Him — “Keep your hand on the stomach of that person – in which OM was there”. The moment He kept his hand on the stomach of that person, the person became alright and all his pain was gone. That was the moment that everybody present at that time, called Him Guruji. Since that day He came to be known as Guruji only. Such was force in this name, that till today most of the people don’t know His name. He is known only as Guruji.

As time passed after that all other symbols of gods, started to appear on His hand one after the other. These symbols included “Trishul with Damru encapsulated inside OM”, “Shivling”, “Ganeshji”, “Nandi the divine bull of Lord Shiva” and numerous others including “The River Ganges” and “The Chakra”. In fact it seemed that all Gods and Godesses were residing in the palm of His hand. There are a lot of lucky disciples(including the one, through whom Gurudev made this site) who have had the privilige to witness those symbols in His hands. 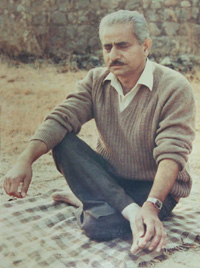 HOW “SEVA” STARTED AT THE STHAAN : Around the year 1971, when Gurudev had already acquired most of His powers, our Gurudev’s Guruji (To whom Gurudev referred as “Buddhe Baba”, but no-one saw Him, except a few priviliged “Shishyas”) gave Him instructions to open the gates of His home to all and start “Seva”. His residence started being called the Sthaan. People with various problems started coming to Him and also started getting cured and relieved of their problems. As fire spreads in the forest, the number of His disciples started increasing everyday. The “Seva” that started with a few people, increased from Tens to Hundreds and from Hundreds to Thousands. When the rush of people started increasing beyond Thousands every day, Gurudev appointed a particular day for “Seva” every month. This was done to ensure, that any one who is coming from outside , definitely gets to meet Him. This day comes on the Thursday which immediately follows the night of no moon (Amavas) every month and He started calling it “Bada Guruvaar”. As many as fifty to seventy Thousand people started coming for Gurudev’s Darshan on this appointed day. These people used to stand in queues which used to take them hours and sometimes even more than a day to get a glimpse of Gurudev. And just the one glimpse, freed them from all their pain and fatigue.

And Gurudev, what can be said about Him. He used to sit for “Seva” as early as 3:15 in the morning and continued to meet people till 1:30 to 2:30 of the next day’s morning without even eating anything. He used to keep His hand on the heads of the people and bless each and every person standing in the queue, anxiously waiting for their turn. Even though we have witnessed that everyone on whose head, Gurudev kept His hand, used to get cured, Gurudev never acknowledged that it was His doing. He ALWAYS said that “Buddhe Baba” is doing it.

Gurudev left His Human Form in the year 1991, on 28th July, two days after “Guru Pooja”, at His own will. In His entire Life, He lived like a Normal person does. His way of dressing, eating, moving… was like any Normal person, but His Powers were immense. He had the power to bestow anything on anybody. But everyone got love from Him equally and without distinction.

Such was the charisma of Gurudev that each and every person firmly believed that Gurudev loved him more than all the others.

Today, after so many years, every tradition is being carried out exactly in the way He had started it. Sewa is being carried on at the sthaan and thousands of people come with their problems and are still being cured. Spiritually Gurudev continues to be with us and will always be…….